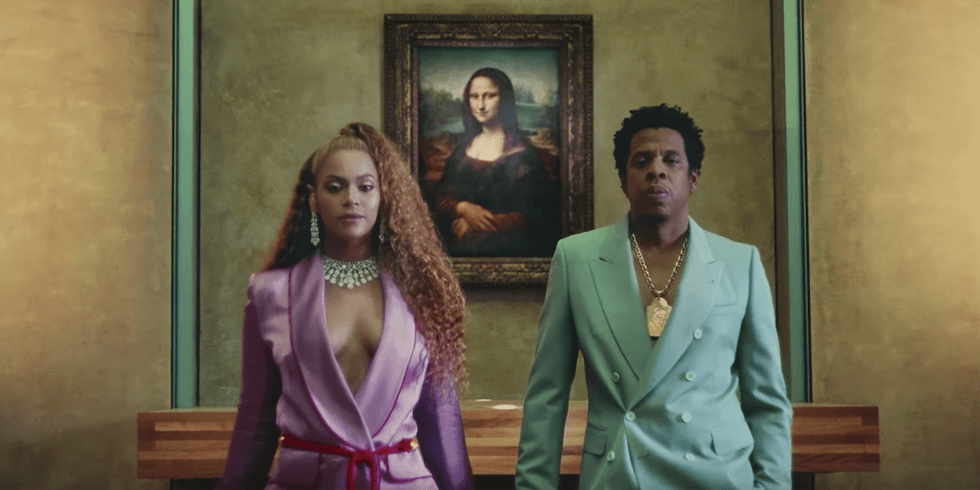 Early Saturday evening, Beyoncé and Jay-Z released a surprise album, Everything Is Love,out of the blue—and simultaneously dropped a music video for the album’s second track, “Apes**t.” The music video is filmed in the Louvre, and features a ton of artwork (including the actual Mona Lisa) as its backdrop. And as Vox writer Constance Grady points out, the inclusion of one portrait at 5:37 of the music video speaks volumes.

Writes Grady: “So this is the painting at the end of the Apeshit video for #EverythingIsLovebtw. it’s “Portrait of a Black Woman (Negress)” by Marie-Guillemine Benoist. it’s one of the only pre-20th c portraits of a black person in the Louvre that’s not explicitly a portrait of a slave.”

Benoist painted “Portrait of a Black Woman (Negress)” just a few years after the official end of slavery, and it swiftly became a symbol of emancipation. Yet the echoes of slavery hang over the subject of the painting, and continue to hang over people of color in the U.S. (in a recent New York Times interview, Jay-Z quoted his sort-of friend Kanye: “Racism’s still alive, they just be concealin’ it”). The close-up of Benoist’s painting is a symbol you can read in a variety of ways—but a symbol nonetheless.

There are other references to race relations in “Apes**t.” At one point, Jay-Z appears to reference unconfirmed reports that he turned down an offer to perform at the last Super Bowl, apparently in support of Colin Kaepernick. “I said no to the Super Bowl,” Jay-Z says in the song. “You need me, I don’t need you/ Every night we in the endzone/ Tell the NFL we in stadiums too.”

You can watch the full “Apes**t” video below.